In 1776, the American colonies declared independence from Great Britain, fought a war to defend that independence, and shortly thereafter became a sovereign nation. Americans have been traveling back to England ever since. Until this week, I’d never visited the “Mother Country,” but as tonight is my last evening here I thought some thoughts and photos were appropriate.

Some random observations I’ve made this week in London…

London is OLD. The United States is a little over 200 years old, London was founded by the Romans 2,000 years ago. While not all of the history has endured, there are some pretty amazing old buildings, including the Westminster Abbey (below). 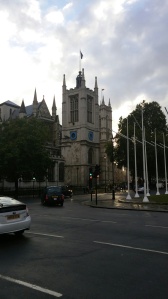 London is WET in October. I’d like to come back in the summer when I can walk around the city a little easier.

England is OBSESSED with futbol. I know, I’m not telling you anything you don’t know, but I spent my week at Stamford Bridge, home of Chelsea FC, at a sports conference and let me tell you…these people are WAY more passionate about their futbol than we are about our football.

London has a learning curve. When you visit, you’d better learn quick to look right first when you cross streets (I almost got smashed by a double decker bus), you’d better “Mind the Gap” in the Underground, and if you’re doing business here, I’d strongly recommend that you “dress smartly” to avoid embarrassment. It will take me a few more visits to get the hang of things.

All in all, I loved London. I’d love to come back for a holiday and see it in more depth. I’m not sure how we’d have turned out if we were still a part of the British Empire, but they’ve done quite nicely for themselves without us. Thanks for a great visit, London, and one of my favorite runs of all times along the legendary Thames. Cheers!

2 thoughts on “Across the Pond”