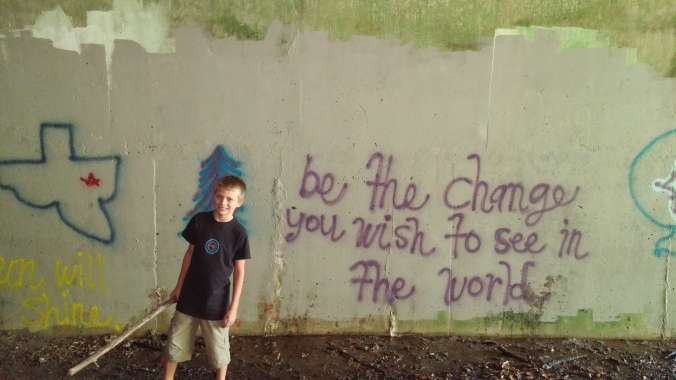 This past summer our family took a trip up to The Road to Nowhere in Western North Carolina. Besides being a really cool hike, the road passes under a bridge that has become a place of thoughtful graffiti for many, including the one above that I snapped with my son, Jack.

“Be the change you wish to see in the world.”

There is some debate as to whether Mahatma Gandhi actually said these words, although they are ascribed to him regularly. Nevertheless, as I was moving pictures over to a new phone this week and came across this picture, it seemed relevant to me.

With all of the political “noise” going on in America today regarding the 2016 Presidential election, it is hard not to be impacted. To be honest with you, it has reached the DISGUSTING level for me. Part of me wants to just bury my head in the sand and ignore everything until the shouting is over in November when we can all go back to our regularly scheduled programming. But that seems like such a cop out. Instead, I’m going to recommit myself to being the change I want to see in the American political world. Here goes…

I want to see people who understand that ‘compromise’ is not a bad word, and in actuality is the way pretty much everything in the world gets done.

I want to see an actual debate where people follow rules of order, have prepared and researched the relevant topics, and conduct themselves with civility.

I want to see a person that puts others’ concerns before their own and is man (or woman) enough to put their ego aside when it benefits the greater good.

I want to see people live out their faith, not tell me about all the stuff they do that makes them “Christian.”

I want to see more servant leaders who ask what they can do to help instead of telling me how they’ll make things better.

I want to see people do the right thing, not just what they think others want them to do.

I realize this is a lofty list and I could easily go on. As with many things in my life, I look at politics and sometimes wonder “what impact can I really have?” Well, I know that I can be the change I want to see in the system and maybe my actions will affect a few and the actions of those few will affect many. When the many act, overarching change will occur. So if you want to see change in our political world as well, be the change you want to see.